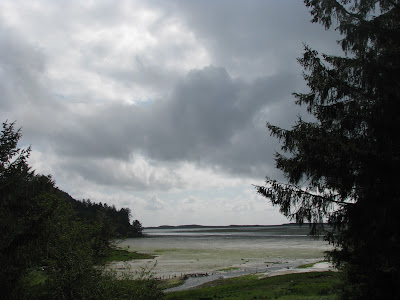 Yesterday was overcast and cloudy but stayed in the 50's. Today has been pretty much the same - the skies did part for a wee bit this afternoon but quickly clouded back over as this band of showers moved ashore.

Weather dood says it will be like this for most of the week but with more sun each day. Clouds. Sunshine. Clouds. Sunshine. Should be mostly sunny for the Memorial Day weekend. I can't believe it is almost the end of May already.

This time last year, we were getting ready for Jennifer's wedding on the 31st. So much has changed since then - my cottage sold, Jen and Mike moved to Oregon, I moved to Oregon staying first at the vacation rental north of Newport and then in October, moved into the peaceful retreat by the bay. In February, my youngest daughter, Stephanie, moved from Utah to Oregon and temporarily moved in with me. In April, she moved to Portland and starts her summer job at Ben & Jerry's as a scooper later this week.

Last week, my mom and stepdad bought a house in Arizona, moved into it on Thursday, listed their Palm Desert house for sale Friday, and got an offer on it Saturday. They can't believe it sold in one day - last year they had it on the market for 7 months before pulling the listed because it did not sell.

So much has changed in the past year. Each one of the changes have felt right and have been for the better. I loved my little cottage by the creek in the redwoods but never felt the peace there that I feel here. I loved watching the occasional bird at the creek but here, there are eagles, swallows, geese, and dozens of other birds I have not identified yet. The redwoods have been replaced by cedars and the creek here is also a salmon run. If this place was a single story, it would be perfect. I learned not to look for perfect at the cottage - here I enjoy the benefits of imperfection.
Posted by Suzanne at 5/19/2009 04:26:00 PM