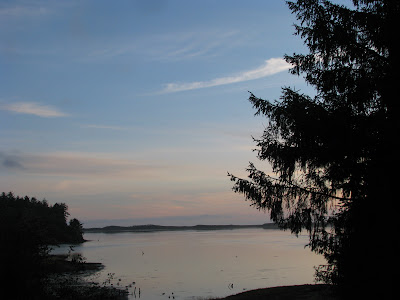 Not much color in tonight's sunset. But that doesn't mean there wasn't any eye candy. If you look at the lower left of the above photo, you'll see birds on the bay, feeding on the goodies exposed as the tide went out. Here's a closeup of some of them: 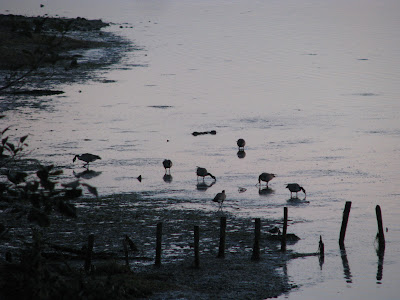 A wee bit of color in this one. 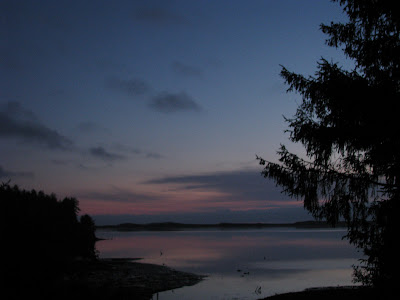 If ya click on this one and make it bigger, and then click on it again and make that bigger, you will see a star in the center. 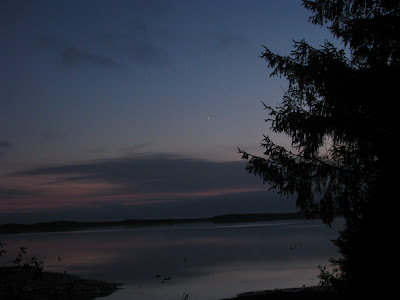 Went into town this afternoon and got a haircut. Called my wood guy to get more wood and that's about all the excitement I had today. Another peaceful day on the bay. Had some sprinkles last night but not much rain. Weather dood says to expect more showers tomorrow.

Tis starting to feel like fall. There is a crispness in the air that tells me the apples will be ready for picking soon. Soon I will be making soups and stews and other hearty food to help keep me warm from the inside out.
Posted by Suzanne at 8/30/2010 09:12:00 PM 6 comments:

Storm clouds headed this way and the clouds were piling deeper and deeper as the day progressed. Towards sunset, the winds calmed down and the bay turned to glass. 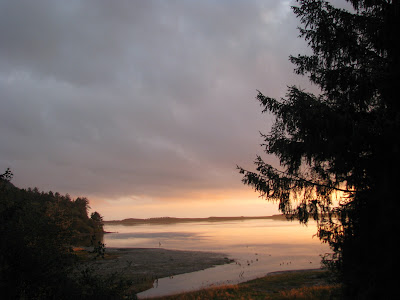 The birds on the bay were more interested in eating than their eye candy surroundings. 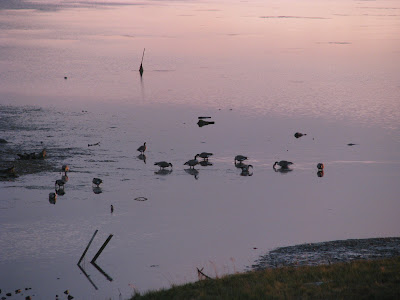 Just before the colors faded to gray. 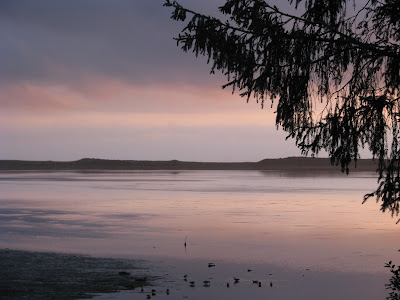 Supposed to get up to a half inch of rain starting tomorrow night. Sure am looking forward to it. After a good rain, everything looks so refreshingly clean and ready for what comes next.

Am trying to figure out when I can head up to the Seattle area for some way overdue sight seeing. Is starting to look like September will have to be the month -- already have plans in October (including my birthday) and by November, I'll be running into the risks that winter travel brings. 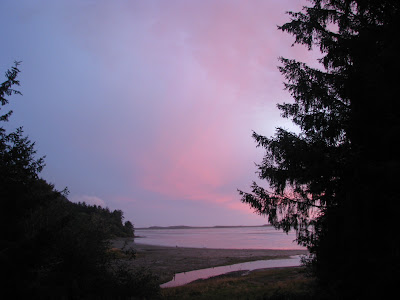 Friday's sunset. Clouds have been moving overhead all day and this one was lined up just right to catch the setting sun's rays. As always, click on the photo to make it bigger.

Haven't had any measurable rain since July 2nd. Weather dood says we may get up to a half inch of rain late Sun night and Monday. Everything is crispy dry -- reminds me of the way the San Francisco Bay Area hills got by the end of June. I'm looking forward to the rain returning the vibrant back to the greens.
Posted by Suzanne at 8/28/2010 12:45:00 AM 8 comments:

Yesterday it was so foggy that I could barely see the creek. 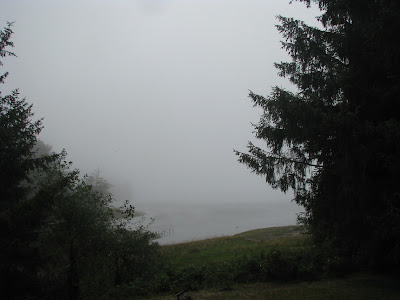 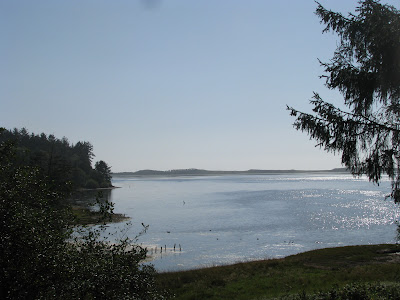 Birds In The Creek

Another day with birds on the bay. This time, they were hanging out in the creek in the same spot the eagles like to wash up when the tide comes in -- but the tide was going out. They were feeding on something -- sticking their heads and chest into the creek leaving their buts stuck up into the air, and then back to floating. 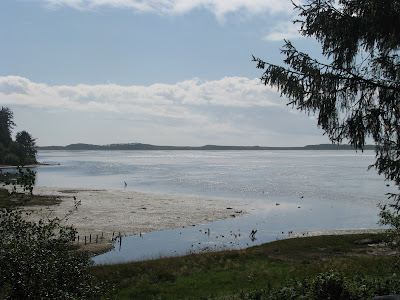 Closer view of the creek. 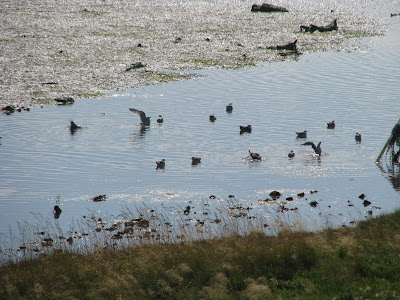 As always, if you click on the picture and open it up in another tab, you can then click on the larger picture in the new tab and make the picture even bigger.
Posted by Suzanne at 8/22/2010 07:32:00 PM 11 comments:

Amazing Grace by Rhema Marvanne. Amazing Grace is one of my mom's favorite songs and she sent me a link to this little girl singing it a month or so ago. Her voice sends chills up and down my spine. I had been saving it -- today is the day it is needed.

My grandma died this morning. She was 94.

My cousin Brett made the video that is linked to when ya click on my grandma's name. It is on Facebook and I don't know how to embed it here. You can hear my grandma talk on the video and there are pictures of grandma with all her kids, her grandkids, and great-grandkids.
Posted by Suzanne at 8/16/2010 10:53:00 PM 17 comments:

The Hot In Pictures

Got up to 93 today. Kept the house closed up and my itty bitty fan going and was able to stay somewhat comfortable.

While I was closing the shades on the bay side of the house, I saw a couple of kayaks out in some very shallow water trying to head south. The low tide was just starting to rise but this appeard to be as far as they could go. I dashed outside onto the deck to take a few pictures and then scurried back inside before I got too hot.

If you click on the first picture to make it bigger, you can sorta see them in the water in the center. 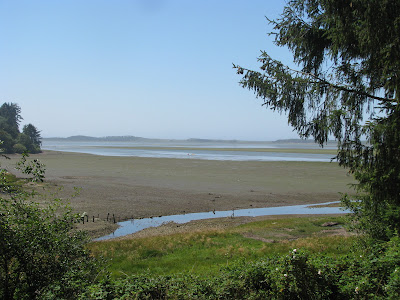 Here's a closer view -- they realized they couldn't go any further south and turned around and paddled to the north behind the trees. The water was very shallow. 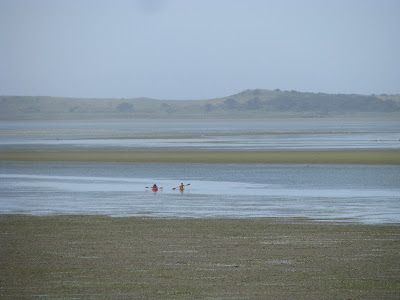 A little later, I saw birds on the bay where the creek enters the bay. This is the same spot the eagles like to wash up in. 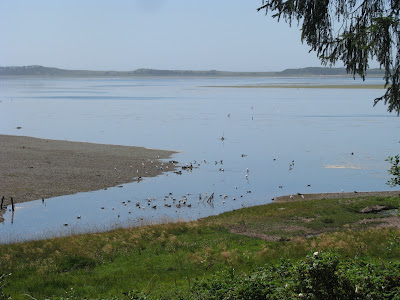 A closeup of the birds on the bay. 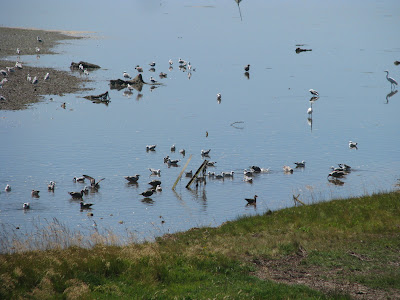 High tide and it was finally starting to cool down. 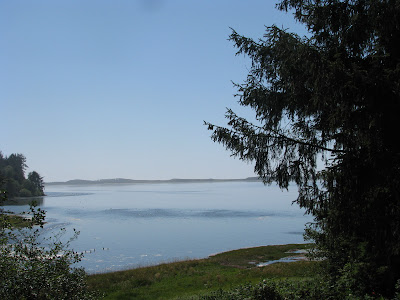 The Hot Is A'Coming

The hot is a'coming. Sure didn't look that way today, although it was 5 degrees warmer than yesterday -- got up to 68 in spite of the marine layer. 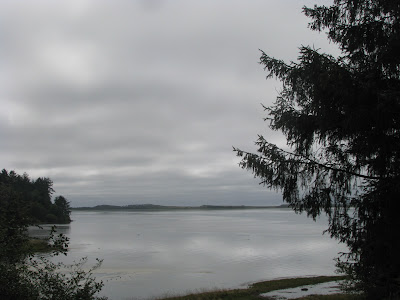 The mat of crap (pollen floating in Netarts Bay) was very noticeable today. Here it is near high tide in the cove where the creek enters the bay. You can also see other mats in the far cove and around the point: 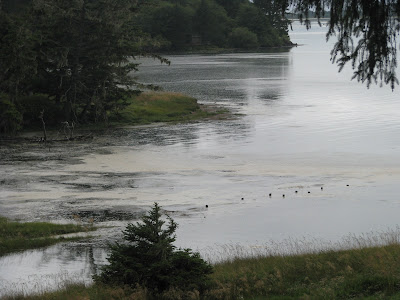 You can see what the tide left behind as it went out in the next two pictures. Needless to say, I'm still sneezing. 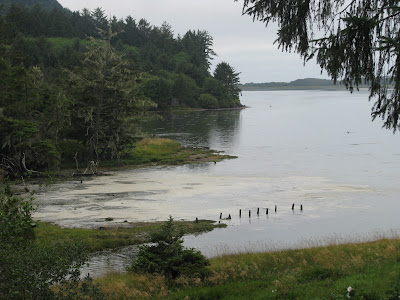 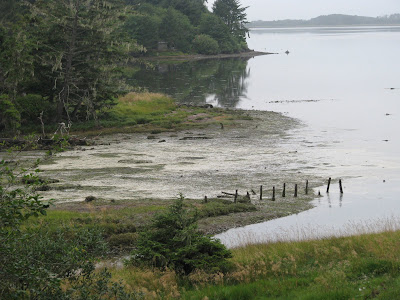 August 12, 2008 was the last night I spent in the little cabin by the creek in the redwoods. Easy date for me to remember since it is my friend Joanie's birthday.

I put the padlock on the pod on August 13th, locked up the cabin, gave the keys to my real estate agent and headed down to Carmel to spent the night with a friend. I started my trek north on the 14th, headed up 101 to my temporary digs in Otter Rock. August 15th was the first night I spent in Oregon -- I had stayed in a motel in Crescent City, CA on the drive up.

A lot sure has happened in the past two years but I do not regret moving to Oregon. I can not imagine living back down in CA again -- I've been spoiled by the nice folks, cheaper cost of living, the slower pace to life, and drop dead gorgeous eye candy the State of Oregon offers.

Went into town today -- ran some errands and picked up some groceries. My plan for the heat is to hunker down, close the blinds and shade the windows on the west facing side of the house. On the plus side, I'll have an opportunity to wear the summer clothes I brought up in those two suitcases two years ago. I have to admit, I was freezing a lot (especially considering it was August) when I first got up here but I like to think I have acclimated since then. 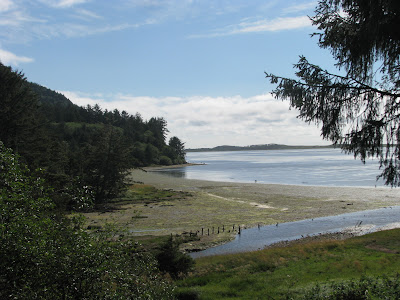 Finally -- a wee bit of sunshine today! It had been almost 2 weeks of overcast skies and I have to admit, my old eyes were not used to all that brightness. I've probably got a few new wrinkles from squinting today but they would be totally worth it.

The rose that tries to eat the stairs is putting on quite a show -- both from a distance and up close. 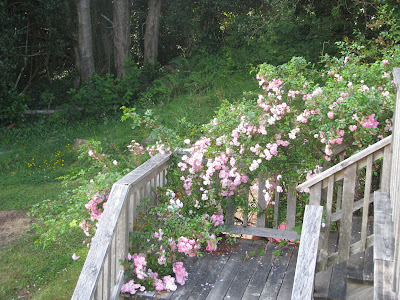 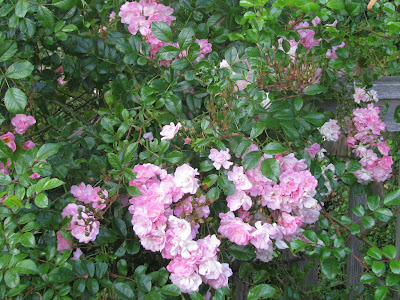 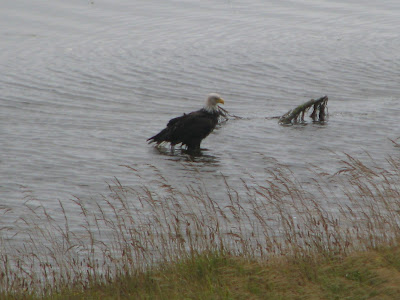 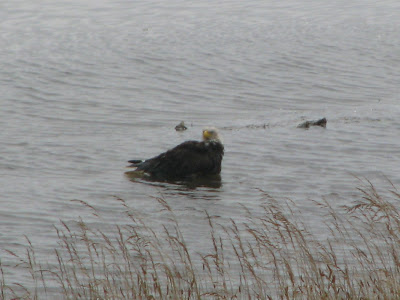 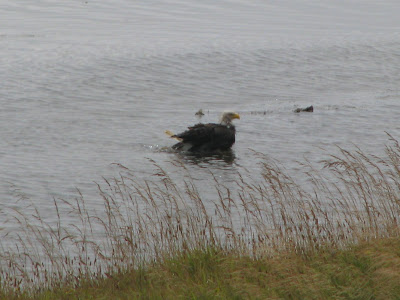 This afternoon, I had the good fortune of watching this eagle wash up in the creek. The eagle landed at the junction of the creek and the bay as the tide was coming in and pushing against the creek water flowing into the bay.