Sunshine on the coast today. There is a controlled burn up at the top of Cape Lookout that makes it sorta look like a volcano. The red glow up there at night is spooky but I've not figured out how to photograph at night with my camera. Tis the time of year for controlled burns, now that we've had some good-sized soaking rains, the burn prohibition has been lifted. 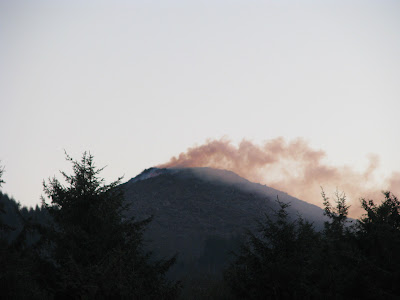 The next photo is of tonight's sunset as seen from the deck. The sun has moved a lot further south and is almost clearing the trees from this angle. You can see some of the smoke drifting north above the spit from the controlled burn. 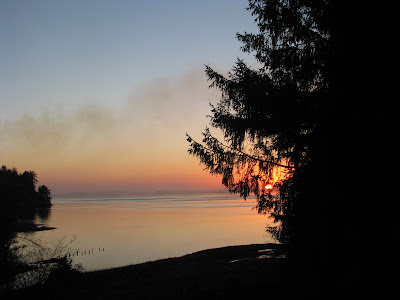 The last picture is of the sunset from the breakfast room. That room has the least obstructed view of the bay and the sunset has cleared the trees when viewed from it. 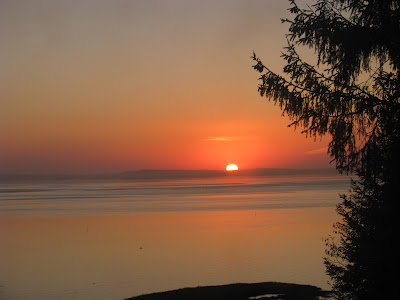 My future grandbaby is now Baby Avocado. From Thursday's email:

Get ready for a growth spurt. In the next few weeks, your baby will double his weight and add inches to his length . Right now, he's about the size of an avocado: 4 1/2 inches long (head to rump) and 3 1/2 ounces. His legs are much more developed, his head is more erect than it has been, and his eyes have moved closer to the front of his head. His ears are close to their final position, too.

Jen finds out if Baby Avocado has a stem or not November 18th. She's currently 16 weeks and has begun to wear maternity pants. I expect by Thanksgiving, she'll have started to wear maternity tops also. By then, she will be 20 weeks along and halfway there.

Jen and Mike have invited me to celebrate Thanksgiving with them again this year -- twill be their first Thanksgiving at their new house. I'm looking forward to the celebration. Mike's brother and sister-in-law will be there along with Tim and Stacy's two teens and they are all a lot of fun to be with. The food will be magnificent based on previous Thanksgivings. Jen should be showing a lot more by that day and I'm looking forward to teaching Baby Avocado how to kick on command.
Posted by Suzanne at 10/30/2010 12:50:00 AM 2 comments: 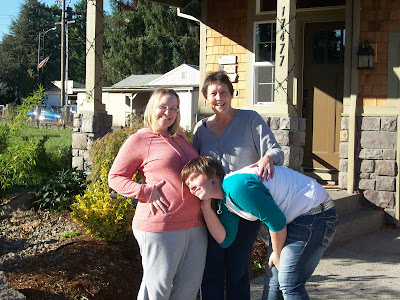 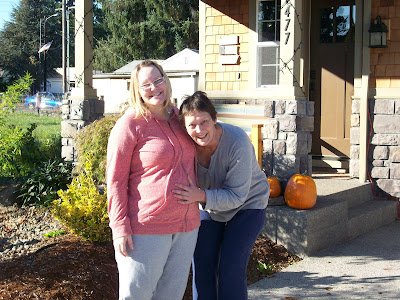 Steph and I insisted that Jen stick out her tummy in these photos trying to get the baby bump from Baby Apple to photograph.

This is from the weekly email Jen gets about baby development and size comparison that she forwards to me:

Your growing baby now measures about 4 inches long, crown to rump, and weighs in at about 2 1/2 ounces (about the size of an apple). She's busy moving amniotic fluid through her nose and upper respiratory tract, which helps the primitive air sacs in her lungs begin to develop. Her legs are growing longer than her arms now, and she can move all of her joints and limbs. Although her eyelids are still fused shut, she can sense light. If you shine a flashlight at your tummy, for instance, she's likely to move away from the beam. 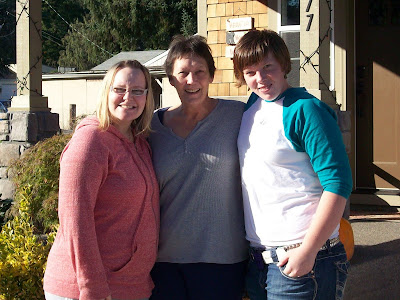 Jen, me, and Stephanie. 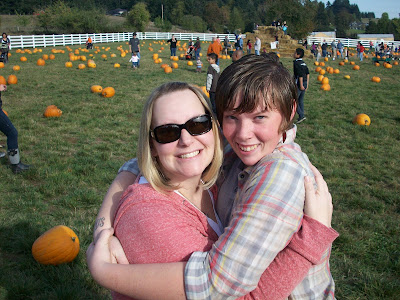 Email ThisBlogThis!Share to TwitterShare to FacebookShare to Pinterest
Labels: family, my girls

Woke up around 11, looked at the clock, and rolled back over to sleep for a wee bit more. I was expected to head to Jen's to celebrate my birthday and I had told her I would get there sometime between 2 and 3. Got up at noon, and called Jen at 12:30 to let her know I was on my way. Tis about an hour and a half to Jen's so I knew I had plenty of time. Got to Jen's at 2:15 and, of course, had to use the bathroom right away. Put my purse down in the living room and headed to the bathroom. Afterwards, as I entered the living room, I saw a figure standing to the left sorta in the corner.

I immediately enveloped her in my arms and was crying and laughing at the same time. She had flown in from Colorado to see me for my birthday!!! I get teary just thinking about it -- and how both Jen and Stephanie conspired to give me the best present of all -- being with both my girls at the same time. I'm just amazed.

Best Birthday Ever doesn't even cover how wonderful the afternoon was. Steph took pictures and will email them to me when she gets back to Colorado tomorrow.

Jen made a banana nut bread for my 'cake' and I blew out all my candles on one breath so my wish will come true. I was so happy I could hardly think but think I was able to come up with a pretty great wish.

When Steph sends me the pictures she took this afternoon, I'll put up a new post with descriptions of our good time and my presents. I'm still just blown away and have a big ole goofy grin on my face. The last time I had both my girls with me at the same time was at Jen and Mike's wedding in May, 2008. I've seen them each individually since then but not both at the same time. During the 6 months that Steph was in Oregon last year, we just never all hooked up at the same time.

Last time I saw Stephanie was when she headed to Colorado 'for 6 weeks'. That was August a year ago -- she loves Colorado and decided to stay there. She looks so good -- seeing her looking so good was exactly what I needed. She's a grown woman but she will always be my baby girl and until I saw her today, I had worries about how she was doing. All those worries were put to rest immediately the minute I saw her.

The afternoon flew by and before I knew it, it was time for me to head back home. I really regret that rolling over for more sleep this morning -- that time could have been an extra hour spent with both my girls.

Jen looks wonderful. She is glowing with that 'pregnant glow' and her baby bump has gotten bigger. Gave her, Mike, Baby Lemon, and Steph multiple kisses and hugs when we were saying our g'byes. I was waving madly and blowing kisses out the window as I drove away until I was around the corner and could no longer see them. Wish I could have stayed longer but I don't see as well as I used to when it is dark and try to avoid driving after dark if I can. 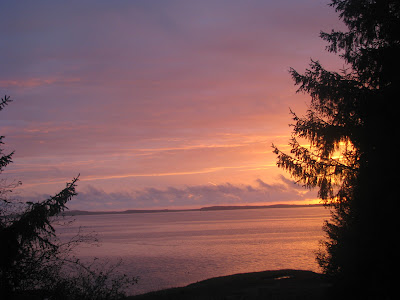 Thursday's sunset -- the sunsets are moving further and futher south. Soon, the trees will no longer block my view and I'll watch it set behind the spit. Spent the afternoon with my friend Teddy hanging out here, at a great cafe in Oceanside, and then showing him both Cape Meares and Cape Lookout. We had a great time and are going to do it again real soon. Twas his first time at the Oregon Coast. The day was drizzly and overcast but shortly after he headed back to Portland, the clouds lifted.
Posted by Suzanne at 10/15/2010 12:33:00 AM 17 comments:

T'was an ugly gray day today so I'm sharing sunsets from earlier in the week instead of bitching about my day and whining about the weather.

Both have a slightly different view -- they were taken from the breakfast room by the front door. Tis directly over the bedroom of the downstairs unit so I don't use it as an office as I had originally planned. Really does have a great view but the living room has the wood stove.

Tuesday's sunset was neon -- you can tell that the setting sun is still hidden behind the stand of trees on the right but it won't be long -- it is moving south daily. 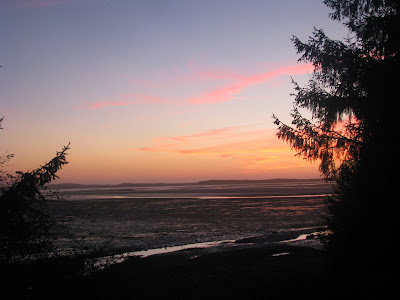 This was Wedsnesday's sunset. Pretty but not as electric as the day before. 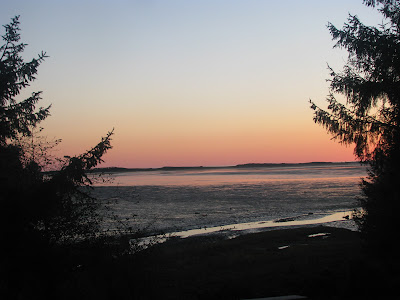 I'm sure my take on the day today was colored by being in a very foul mood. I'm sure I'll be in a better mood tomorrow... ok, later today.... and will be back to waxing about the silvery clouds, the sounds of falling rain and the way the trees sway in the wind. Today was a bah humbug kinda day. 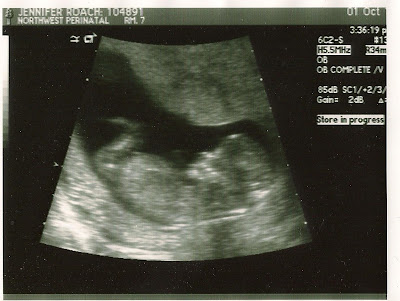 Baby Lime as of Friday.
I drove over the hill to spend time with Jen and Mike Sunday afternoon. Jen looks wonderful! She has a nice baby bump and pictures from her ultrasound Friday for me to coo over. We looked at paint chips for the nursery, with various scenarios pending the results of the testing November 18th that tell her if Baby Lime is a boy or a girl. Mike made a scrumptious chocolate chip cake with vanilla frosting while Jen and I talked babies.

Jen told me the technician at the ultrasound Friday told her she had a very active baby and was surprised that Jen wasn't feeling movement yet. While we were sitting in the living room chatting, she got very still, her eyes got big and in a wonderous voice, she said she thought maybe she felt the baby move. I knelt down beside her and put my hand on her lower belly and we waited...

Sure enough, a minute or two later, I felt a wee little rumble of vibration through my thumb! Mike came over and sure enough, he felt it too. We musta stayed like that for at least 5 minutes, with Jen and I exclaiming did you feel that as we felt Baby Lime move several more times.

Picture is of Baby Lime, head on the right facing the left in profile (isn't that the cutest little nose), chest and tummy, and legs bent at the knees with the feet not visible in this particular image.
Posted by Suzanne at 10/04/2010 01:17:00 AM 6 comments: