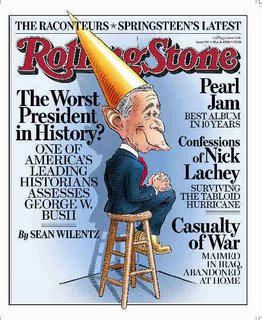 Go read Rolling Stone Magazine's detailed profile of Bush (or as I like to call him King George 43*) and the damage he has done.

Bush has chosen to act in ways that have left the country less united and more divided, less conciliatory and more acrimonious -- much like James Buchanan, Andrew Johnson and Herbert Hoover before him. And, like those three predecessors, Bush has done so in the service of a rigid ideology that permits no deviation and refuses to adjust to changing realities. Buchanan failed the test of Southern secession, Johnson failed in the face of Reconstruction, and Hoover failed in the face of the Great Depression. Bush has failed to confront his own failures in both domestic and international affairs, above all in his ill-conceived responses to radical Islamic terrorism. Having confused steely resolve with what Ralph Waldo Emerson called "a foolish consistency . . . adored by little statesmen," Bush has become entangled in tragedies of his own making, compounding those visited upon the country by outside forces."


*King George 43: the Bush White House has declared that the president's powers as commander in chief in wartime are limitless.
Posted by Suzanne at 4/20/2006 11:10:00 AM