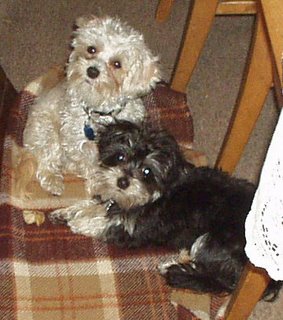 It's raining again so I've been playing around with TTGB (the Comments Section in particular) and have added a bunch of new links. We should get anywhere between one and three inches out of this storm. I would prefer less only because a friend is pouring a concrete foundation today. Luckily, the work is indoors and he is using a pump truck but it would be better if it was not raining while they do the pour. I've had sunshine the past couple of days and it sure was nice. Nicer still was the news on all the networks, including cable (FOX even - gasp), about Bush's culpability in the leak of classified information for political and partisan reasons. I was glad to see several stories that mentioned the quandary Fearless Leader now finds himself in, having previously stated that any leaker in His Administration would be fired!

Be sure to check out Ivy's Boulder Creek Birdcam (during Daylight hours) or Boulder Creek to find out what is happening up here. Ivy gets more birds than I do but it gives you a glimpse of what life up here is like. Lots of eye candy with redwoods in the background!

Boulder Creek is described on its website as "A Compendium of World Wide Web Links to the town of Boulder Creek and Environs, California". They have their own web page that will tell you our current weather conditions. The snow on the redwoods on their home page was from our recent storms. Snow all around me but none at my cabin. Might as well as had snow here since all three roads into and out of the valley were closed and I was unable to get off the mountain and "over the hill" into the San Jose area.

If you are registered with Blogspot, your name should show up as the first option and it is selected. There should also be the options of: Anonymous and Other. If you click on Other, it will show Name and Your Web Page boxes, filling in of which are OPTIONAL. Just put your name (for example, Jennifer), in the Name box, leave the Your Web Page blank (unless you have a web page, then certainly fill that it and I will come visit it from the hyperlink it creates) and Blogger will automatically fill in your name at the end of your comment, just as it does when I post a comment.

Sure makes it easier and you don't have to register with Blogger (who will try to get you to create your own blog).

If you select the Anonymous, then you have to include your name in the body of the post in order for me to know who it is from.

Earlier in the week, I mentioned I was looking for a picture of Token and his sister, Goldie and would post it when I found it. Ron emailed some to me (thank you Ron) and Barry and Naomi, Goldie's owner, gave me several too (thanks Barry). Blogger has been difficult and is not allowing me to upload. I'll just have to do it later when Blogger is not hiccupping.

UPDATE: Blogger finally allowed me to post Goldie and Token's picture. This was taken this past winter at Goldie's house. They were between the heater and the dining room table. Have I mentioned how smart they are... (laughing)

Goldie is the blonde on the left and my little guy, Token, is on the right. She takes after their mother, Pager, in most everything, including appearance. Token, however, looks just like his dad. Goldie is a Princess. Token wants to be a Big Dog. Goldie sat somewhat up for the picture but Token is just laying there looking grumpy at being disturbed. At least they were both looking at the camera at the same time.