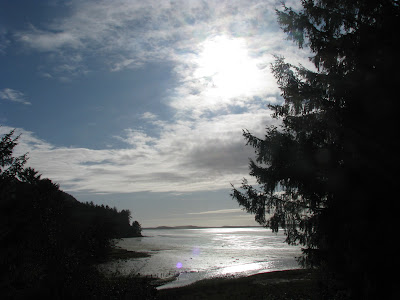 I moved into the peaceful retreat on the bay one year ago today.

Rainfall totals are calculated from October 1st to September 30th. My rainfall total for the past year is 42.06 inches -- a dry year when compared to the average of 70 inches a year.

The changing of the season is in full swing here. I noticed the start of the change in leaf color at higher elevations mid-September but the leaves are now starting to begin their changes down here at sea level. No color yet - but the vibrant green is dulled. Color should start making an appearance any day.

The air feels different - cooler and it has a crispness in stark contrast to the softness of the summer air. Am starting to think about my fall and winter cooking -- thoughts of baked potato soup, cornbread, and meatloaf with smashed potatoes, roast turkey instead of chicken, bread pudding instead of ice cream. Have been wearing fleece all week (yay!) and am going to be back to wearing socks soon.