Teach Me To Enjoy Monday! 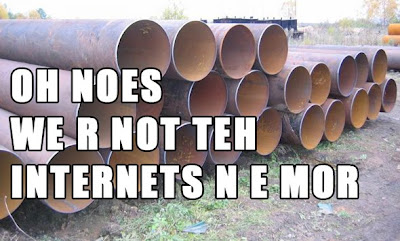 I was enjoying my Monday evening off -- forking around on the computer and watching Ken Burns' National Parks on tv when my internet went down at 8:15pm. It had been doing so fairly frequently lately so I was not too alarmed - just more irritated in a here we go again kinda way. After an hour passed... and then two... and then four... and the tubes were still down.. I was starting to get .... uh ... mmmmm ... well a polite term would be tic'd off. Tubes were still down when I went to bed.

Unfortunately they were still down when I got up Tuesday. I stopped by the Charter office in Tillamook (since they do not have a local telephone number -- only an 800 number to an office in Michigan) but they were of no help since I am not the account holder (my landlord is). The clerk said they would have a tech call me between 4pm and 5pm.

Sigh. No one called.

Coming up on 24 hours without an internet connection, I was not a happy camper. Tis a good thing I live alone considering the mood I was in. There was a forking tsunami advisory on the Oregon Coast last night due to the Samoan earthquake and I had to rely on forking tv news stations for updates. Blerg.

Had to call FDL and arrange coverage of my mod shift for the evening and have an admin publish my Tuesday Late Late Night post (which was ready to go but still in drafts). Thankfully, Lurk de-lurked and let the readers know that I wasn't there because my tubes were down. I owe Lurk a buncha dark chocolate with pecans.

I let my landlord know Tuesday the Charter tech had not called and he very kindly came out from Portland very early this morning. He arrived at Charter as their office opened, obtained a replacement for the defective cable modem the lady at Charter refused to test yesterday when i took it it, and showed up on my doorstep to replace it. He did so and then discovered the router was also down.

Lets just say I was up before the crack of noon and did not complain. Not once.

After 3 almost 4 hours of working on it, including 3 calls to tech support, the problems were finally resolved, my landlord headed back to Portland, and I'm surfing the innertubes again trying to madly catch up.

I have to say the new cable modem and entirely wireless setup is significantly faster than the old cable modem/router system was. I can take my laptop out on the deck and even out to the picnic table and still be connected. Way kewl :)
Posted by Suzanne at 9/30/2009 07:27:00 PM

Email ThisBlogThis!Share to TwitterShare to FacebookShare to Pinterest
Labels: meta