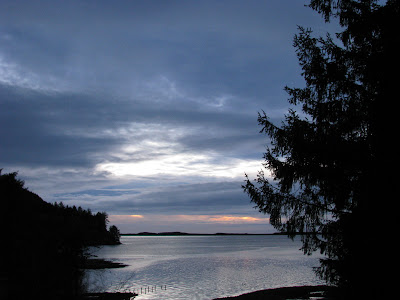 Storm came in last night -- so far I've picked up 3.26 inches and it looks like the majority of the rain has fallen. The heavy bands appear to have moved east and the rain isn't drumming as loud on the windows. Yearly rainfall total so far of 30.86 inches. Still getting whipped by the wind making tonight a dark stormy night here on the coast.

Took this picture yesterday shortly after the clock said sunset had passed. The clouds parted just enough for a wee bit of color before the evening's darkness descended -- I would have called it a sun break but the sun was already gone.

Been busy trying to finish a book before Saturday's FDL Book Salon. A good day for reading but I haven't been able to sit and read as much today as I hoped. My landlady and I went out to dinner tonight -- my first attempt eating in public with the upper plate. A said that my nervousness and awkwardness wasn't noticeable to anyone other than myself and swore up and down that I am the only one that can hear a 'whistle' when I pronounce "S" sounds.

Weather dood said rain likely off and on all week but is forecasting Thursday to be partly cloudy instead of the solid overcast and gray that it has been lately. Looking forward to the hopes of more color at sunset.
Posted by Suzanne at 1/04/2010 10:01:00 PM