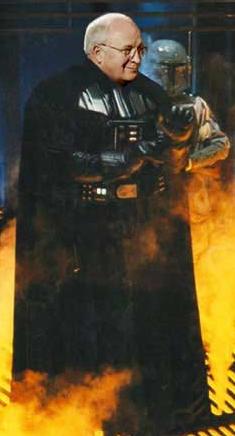 Well, well, well. Murray Waas has a new article up at the National Journal and it is a doozy. Murray is the only reporter covering the intentional disclosure of an undercover CIA agent, Valorie Plame, by the Bush administration for political reasons. He probably knows only a wee bit less than the prosecuting attorney, Patrick Fitzgerald, about the details, and that is only because Fitzgerald's office has a strict "no comment" policy.

Irving "Scooter" Libby has been indicted and it looks like his perjury charges were a result of his trying to keep Cheney's name out of the investigation.

Murray has learned that Bush told prosecutors he directed Cheney to disclose classified information that would not only defend his administration but also discredit Wilson.

Here's a another little tease from the article.

President Bush told the special prosecutor in the CIA leak case that he directed Vice President Dick Cheney to personally lead an effort to counter allegations made by former Ambassador Joseph C. Wilson IV that his administration had misrepresented intelligence information to make the case to go to war with Iraq, according to people familiar with the president's statement.

Bush also told federal prosecutors during his June 24, 2004, interview in the Oval Office that he had directed Cheney, as part of that broader effort, to disclose highly classified intelligence information that would not only defend his administration but also discredit Wilson, the sources said."

UPDATE: Emptywheel at The Next Hurrah has posted her take on Waas' column. She is a Plame expert and was on the Plame Panel at YKOS (with Murray Waas, Jane Hamsher and Christie Harden Smith from FDL, Larry Johnson from No Quarter (former CIA) and "Mr Valorie Plame" (as Ambassador Joe Wilson described himself at the panel).

Emptywheel's reading is "that Dick Cheney ordered Libby to leak Plame's identity. And Bush apparently dissociated himself from that leaking."
Posted by Suzanne at 7/03/2006 01:29:00 PM