The War on Women By the FDA 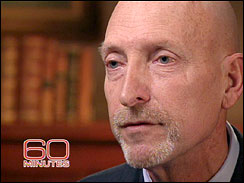 I am so friggin pissed. The man pictured to the left is Dr. David Hager, Bush's man at the FDA and was profiled on 60 Minutes last night.

Their report was about the FDA and Plan B, which is the common name for the "morning after pill". Didn't get to see it all but saw enough to piss me off and cause me to do some surfing later in the evening.

I found John's post at Crooks and Liars where he connected the dots for me. From John's post, I found links to other articles and the one that really got my dander up is this one from The Nation, entitled Dr. Hager's Family Values.

First, go read what CBS has to say, including this:

Did the Bush White House pressure the Food and Drug Administration to block the "Morning After Pill," known as Plan B, from being sold over-the-counter at your local drug store? That question is the focus of a hearing in federal court on June 13, where birth control advocates have sued the FDA to make the drug available without a prescription.

Even though the drug is considered totally safe, the FDA has repeatedly postponed a decision, forcing the Federal hearing this Tuesday (as in tomorrow).

Then check out what C&L said regarding:

Here's the next drug they have targeted and guess what?...

Then go read the Nation. Take your blood pressure pills before ya do because THIS IS BUSH'S MAN on the FDA Advisory committee. A Fine Upstanding Christian Doctor. The rage started building for me on page two and was full-tilt by the last page. I've been trying to stay calm since.

Now that the Food and Drug Administration has again delayed over-the-counter sale of the morning-after pill Plan B, new lobbying efforts are underway to make the drug widely available. This report, published in May 30, provides useful background on how the personal ideology of Bush appointees is adversely affecting the health and welfare of women.

And because of his warm relationship with the Bush Administration, Hager has had the opportunity to see his ideas influence federal policy. In December 2003 the FDA advisory committee of which he is a member was asked to consider whether emergency contraception, known as Plan B, should be made available over the counter. Over Hager's dissent, the committee voted overwhelmingly to approve the change. But the FDA rejected its recommendation, a highly unusual and controversial decision in which Hager, The Nation has learned, played a key role. Hager's reappointment to the committee, which does not require Congressional approval, is expected this June...

Now that we have a taste for this man and his personal ideology (no, its not a pleasant taste), we have the answer to the question posed next.

How anyone could fight against a vaccination against a CANCER that will kills thousands of women every year?

He's got a proven track record of success with his actions regarding Plan B. Given his personal ideology, I have grave concerns.