The Betrayal of Our Soldiers By Our Military 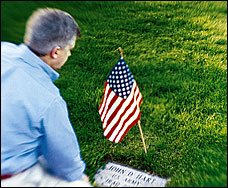 "The world's most powerful military failed to provide the armor that would have saved scores of American lives. One father would like to know why".

So begins a long article at the Washington Post entitled "Fatal Inaction" that should be mandatory reading by all. The above quote is also shown below the picture at left, which is from the article. It ran on Sunday, Father's Day.

It should be the top story on every cable and network news channel. However, since the media appear to be merely lapdogs of Bush, I'm surprised it made the Washington Post. Of course, this wasn't covered by the newsdesk at the Washington Post. It was written by reporters for their Sunday Magazine.
Posted by Suzanne at 6/19/2006 12:38:00 AM