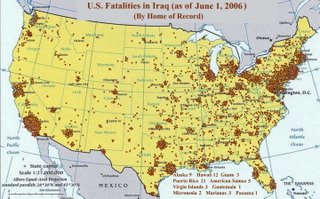 That's right. According to this AP article, "It's a number," White House press secretary Tony Snow told reporters at the White House." in response to a question about our war dead reaching that sad milestone.

2,500 American men and women dead is more than a number. Each was a beloved son, daughter, wife, husband, father, mother, or partner who's death forever changed the life of those who loved them.

Meteor Blades at TheNextHurrah has a sobering post up that lists the names, ages, and rank of all 2,500 of the soldiers who have died by month of death in response to Tony Snow's declaration that 2,500 war dead is "a number".

Remember, the 2,500 "official death count" does not include non-service related deaths by our military, nor does it include the deaths of journalists covering the War or the number of Iraqi civilians or non-military American deaths in Iraq.

I will not forget Tony Snow's words either. They show just how little our soldiers mean to this administration.
Posted by Suzanne at 6/15/2006 05:09:00 PM