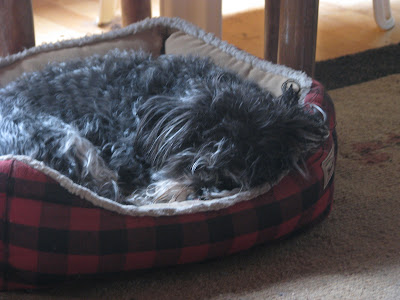 Am home from picking up Token at the vet's. Sure was hard dropping him off last night -- he gave me puppy dog eyes when I handed him over to the vet tech for his sleepover. While he was under anesthesia, they trimmed his nails, gave him his vaccinations, and did a couple other procedures he doesn't like.

He is doing well but is still groggy. Poor little guy had 3 extractions so the bill was a wee bit more than I had hoped for. My trip up to the Seattle area to sight see and visit with friends is on hold until I restock the cookie jar. I hope to be able to head up there after winter is over so I've got plenty of time to save up. I don't like driving on ice and/or snow -- and on the plus side, springtime is so pretty up here so it will be an enjoyable trip.

Token is curled up in his bed next to my chair at the computer report. He sipped a wee bit of water when he got home, gave Bailey cat a half-hearted tail wag in her direction, and climbed into his bed. He's on no food and limited water until 6pm when he is allowed to get a wee bit of soft food. If he holds that down (he's not had problems after previous dental procedures), he should be good to go for all food and water by 7pm.

He was sent home very well medicated. I was given a baggie with his pain meds - one dose per day of the liquid in the syringes for 3 days starting tomorrow. The meds are slightly sweet and he has lapped them up in the past so I anticipate no problems -- unlike the trying to give him a pill experience. Token's chart at the vets now has bold letters "DOES NOT DO PILLS".