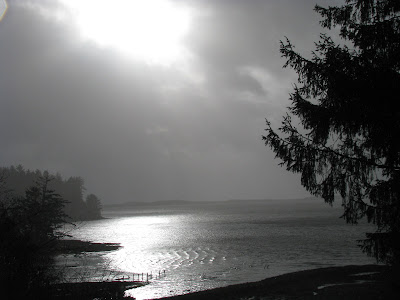 Sun was trying to shine during a band of showers that was moving through this afternoon and lost. Twas the only bit of sunshine I got today.

Got stormy enough last night that the wind blew one of the adirondack chairs from the bayside deck into an empty ceramic pot I had against the railing by the stairs. Broke the pot but the chair is fine Musta been a strong gust from the south to move it clear across the deck to the north. Otherwise, we came through the high winds fine. Weather dood said the wind gusts got up to 53 at Cape Meares to my immediate north and to 63 up in Garibaldi -- at the mouth of Tillamook Bay.

Rain gauge says I only got 0.54 inches which has to be wrong -- that's what it was reading before this last system blew in. I'll go out tomorrow onto the back deck and see what the manual gauge is reading. Looks like I'll have to use that manual gauge for a while.

Am watching the tape delayed Winter Olympics. I'm only a wee bit more than 300 miles south of Vancouver but have to see it delayed because of NBC deciding it must be shown in 'prime time'. Bah humbug -- the Olympics should always be shown live and simulcast worldwide. I want to know I am watching this with millions of people from all over the world -- not just those in my time zone. Blergh.

Back to watching the Winter Olumpics Opening Ceremony which I am enjoying very much. I'm even liking some of the Olympic specific ads shown during the limited commercial breaks. I had planned to be cleaning the kitchen tonight during the commercials but...

Surprisingly, I feel a real connection to these Games, knowing they are less than a day's drive away (and that I have a passport to get across the border). I plan on making a visit up that way this spring -- or maybe early summer so I'm getting a head's up on what sights to see. As evidenced by the opening shots of the coverage of the Opening Ceremony, the Pacific Northwest is forking gorgeous.
Posted by Suzanne at 2/12/2010 10:36:00 PM