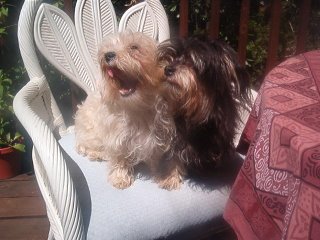 Ok, its really Token and his sister, Goldie.

They are on one of the chairs out on the deck. Just as I was snapping this picture, Goldie barked and they both jumped off the chair. I think the bark was Goldie voicing her displeasure at my feeble attempt to get them to sit in the chair and pose. It's not easy to get the two of them to anything at the same time, much less look at the camera.

Most people do not think they are brother and sister, much less from the same litter. They look (and act) so different. Goldie's poodle and lhasa apso heritage(from mom) is very noticeable - she looks just like her mom, Pager. Her hair is very curly and looks like crushed velvet after brushing. Token, on the other hand, looks just like Spud, his scottie-yorkie mix father. Straight fine hair and bat ears. All brushing does is make him look fluffier. Their hair is about the same length but Goldie's look so much shorter due to the curl. Their temperaments are different too - she is a Princess and he is a rough and tumble run with the big dogs kinda guy.

The puppies (they are no longer puppies but I suspect they will be called that for many a year) decided several weeks ago to become yappers. We have been teaching them to use their "inside voice" and to not bark at all they see and hear. They are learning, although I suspect they are choosing to be deliberately "slow". Never knew a dog to bark at the wind before.

One of the hardest things about moving is the thought of separating them. They have been never been separated for more than a weekend.