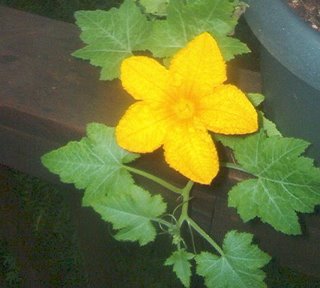 Can anyone name this vegetable? I know what it is (or at least what the little tag that came with it says it is). Just kidding - I would not spring a pop quiz on ya first thing Sunday morning (laughing).

I took the picture yesterday morning, just as the sun was rising. The sky was all grey and foggy but the bright yellow-orange of this flower was glowing, demanding attention be paid to it instead of the wisps of fog dancing in and out of the redwoods.

Lamont is on two of the Sunday Talking Heads shows this morning, including Faux (cough Fox) News. I notice whinny election disregarder Lieberman, also known as Three Time Loserman, is not. Sure was smiling as I typed that.

I still don't understand why Loserman has not been striped of his committee memberships and other perks of being a member of the Democrat Party. Only thing heard coming from the Democrat Leadership about Lieberman's callous disregard of the democratic process is

Howie Klein has a great post up at his blog, Down With Tyranny, entitled The Saturday Science Lesson - A New Element. I'm posting the beginning of his post here, just to get you in the mood for the rest of the article, which deals with a new study showing how America stands compared with the rest of the world. If nothing else, head over there to see the graphic that goes with this section:

A major research institution has just announced the discovery of the heaviest element yet known to science. The new element has been named "Bushcronium." Bushcronium has one neutron, 12 assistant neutrons, deputy neutrons, and 224 assistant deputy neutrons, giving it an Atomic mass of 311. These 311 particles are held together by forces called morons, which are surrounded by vast quantities of lepton-like particles called peons. The symbol for Bushcronium is "W". Bushcronium's mass actually increases over time, since each reorganization causes more morons to become neutrons, forming isodopes. This characteristic of moron-promotion leads some scientists to believe that Bushcronium is formed whenever morons reach a certain quantity in concentration. This hypothetical quantity is referred to as "Critical Morass." When catalyzed with money, Bushcronium activates Foxnewsium, an element which radiates orders of magnitude, more energy, albeit as incoherent noise, since it has just as many peons but twice as many morons.

Tell me what you think of the Jon Miller of Michigan State quote in the study.

Enjoy your Sunday. The fog has prevented me, once again, from being able to see the Perseid Meteor Shower. On the plus side, I spent a nice, quiet Saturday night with a fire going in the wood stove. Goldie and Token took their evening naps laying in front of the fire, letting the heat chase the dampness away.
Posted by Suzanne at 8/13/2006 03:06:00 AM