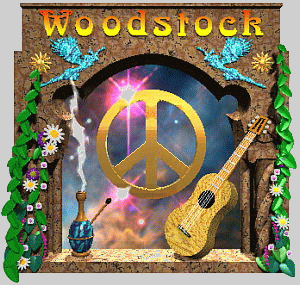 By the time we got to Woodstock
We were half a million strong... CSN&Y

Yes, 37 years ago was Woodstock. Found this site (and the great graphic) with lots of Woodstock Festival info, including pictures, musicians, play lists, reunions. I did not know there is now a small park and monument at the location with plans to create a music/arts center. Found that and other memory refreshing info at the same site.

I'm sure there are other sites out there but this one made me chuckle, especially when mentioning Murphy's Law (that rat-bastoid cousin) and the various groups in the audience. And the graphic rocks!