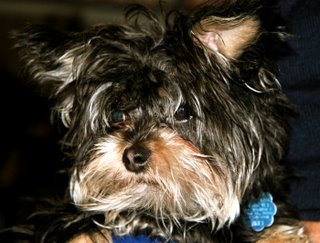 Ok, I admit, I got rather carried away celebrating Tuesday and neglected to post a Token Tuesday pic. I dug into my files and found this one taken in January. Isn't he just the cutest dog in the world?

Such a terrible day this is starting out to be. The Bush administration raised the terror level to red, the highest, the first time it has been raised since right before the 2004 Presidential election. Makes me wonder why they want all the press this morning to be focused on the bright, shiny terror rating and what they don't want the media focus on. Of course, now that we can not taking any liquids onto airplanes, how much you wanna bet the airlines charge for water.

TRex wrote a powerful post last night at FDL, entitled "Why It Matters". Very somber post (instead of the usual Late Nite snark) which ends:

A vote for Joe Lieberman? It'’s a vote to kill another American soldier. By not deciding. By "staying the course". By not facing up to the reality that our troops'’ lives and bodies are not to be squandered on corporate wars. The reason the Republicans don'’t want the war to end is because they haven't gotten an adequate return on their investment. That oil'’s not flowing. "If we leave now, things will only get worse." Well, yeah. That'll mean we didn'’t get any oil at ALL!

The funeral for CHP Officer Clearman is today, and the suspected driver of the hit and run vehicle appears in court today.

The creator of "Frank and Ernest" has died. Bob Thaves, whose nationally syndicated comic strip "Frank & Ernest" amused newspaper readers for decades with its quirky observations on life, has died of respiratory failure. He was 81.

Joe Loserman Leiberman went ahead with his giant fuck you to the Democrat Party and the voters of CT by filing the paperwork for his independent run around the democratic process. Hell of a message you are sending to the world about American democracy there, Joe. Why are you the only candidate who does not realize that when the voters speak, you listen and do what they vote? Joe joins Bush Co in pissing on the Constitution. He was a Republican in Democrat clothing and now his true colors are showing.
Posted by Suzanne at 8/10/2006 04:53:00 AM