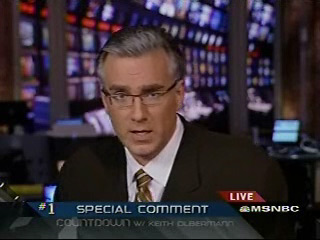 And the fifth crucial lesson of Vietnam, Mr. Bush, which somebody should've told you about, long before you plunged this country into Iraq — is that, if you lie us into a war — your war, and your presidency, will be consigned to the scrapheap of history.

After President Kennedy's assassination, Lyndon Johnson held the country together after a national tragedy — not unlike you tried to do.

He had lofty goals and tried to reshape society for the better. And he is remembered for Vietnam and for the lies he and his government told to get us there and keep us there… and for the Americans who needlessly died there.

As you will be remembered for Iraq and for the lies you and your government told to get us there and keep us there… and for the Americans who needlessly died there — and who will needlessly die there tomorrow.

Keith Olbermann - one of that rare breed of newscaster - a truth teller.