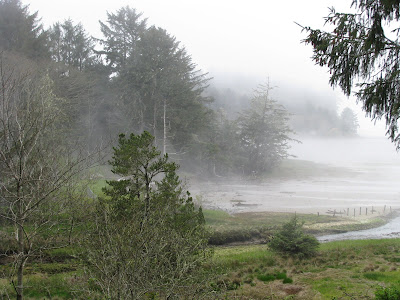 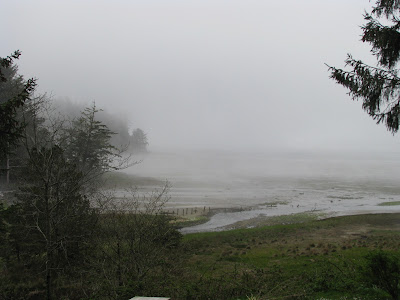 Spent yesterday up at my buddy Busted's place. As I was driving through the Portland area before crossing into Washington state, there was not a cloud and the sky was bright blue. Was able to see Mt. Hood to the east and Mount St. Helens to the north. Both made stunning contrasts to the blue sky with their sparkling crowns of snow. Made me wish I had brought my camera with me. After helping Busted reorganize his kitchen (note to larue: no purple no frills), I headed home in time to grab a bite to eat before work last nite.

Weather dood said Monday would be as gorgeous as Sunday but he lied. Woke up to weak sunlight (sigh). Drove into Tillamook to run some errands where it was bright sunshine. Was gone less than an hour and returned just as the fog was blowing in. The first picture is of it coming in and the second was taken just a few minutes later - shows how fast it came in and how socked in I was all afternoon.
Posted by Suzanne at 4/20/2009 05:25:00 PM