Steelhead In The Creek 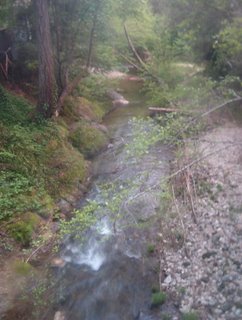 Last night, just before dusk, Naomi came in to tell me there was a steelhead in the creek. I grabbed my camera to take a picture of it. It was about 18" long and was in the pool the steelhead use for spawning under the wood bridge.

Unfortunately, my attempt was unsuccessful. I was looking down into the creek and could see him/her clearly when I took the pictures. I've tried cropping and all kinds of tricks to show the fish more but it really is not distinguishable from the rocks.

Instead you get this picture of the creek just before dusk. The water is getting back down to summer level after getting almost 20" of rain in 6 weeks (March to mid-April). Soon the swiftness of the water will slow, making it easier to wade. It still runs fast due running downhill from the bridge to the river but doesn't make me worry that I will have my feet knocked out from under me by the current.

We last had steelhead in the creek in December. I was glad to see this fish made it past the salmon fishermen down river and in the Monterey Bay. Each one that makes it up here has run that gauntlet.
Posted by Suzanne at 5/05/2006 08:52:00 PM