Birds On The Bay 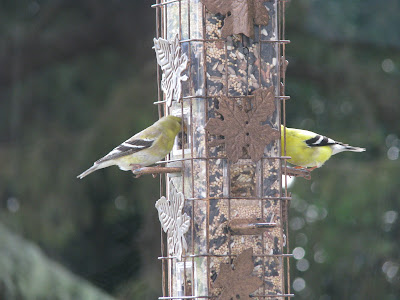 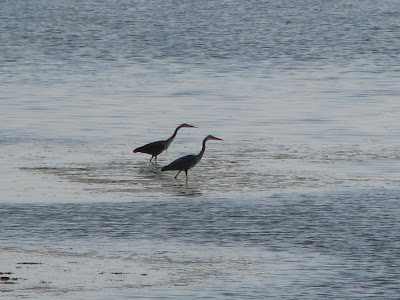 Finally got to take a picture of the pair of goldfinches that have been visiting the feeder. The bright yellow male is not camera shy but his duller female counterpart sure is.

Also saw this pair out walking around checking out dinner on the bay's rising tide but don't know what they are.

There are two barn swallow nests in the rafters above the front deck. Can't see what's inside them - usually just the pointed up into the air v-shaped tail of a bird with its head and body doing something inside the nest. When a second barn swallow arrives, the first one flies off and the second one does the tail in the air bit.

Had an unknown variety small bird fly into the house the day before yesterday - I was wearing a long sleeved shirt over my tshirt and quickly slipped it off and gently over the bird batting its wings against a window. Trying not to touch it and being very very careful, I carried it out onto the deck and opened the shirt. Off it flew and I returned inside, closing the door behind me. As I was walking out with the bird, I saw Bailey walking towards us - in stealth kill mode - but I was faster than her. Again.

This is the 3rd bird that has gotten trapped inside after flying inside the open front door - twice hummingbirds had done so earlier in the spring and now this little one. I've gotten each one outside before Bailey gets to them.
Posted by Suzanne at 6/01/2009 12:42:00 AM